You probably did not expect this, but Stuttgart is a city with many hills and with 400 to 600 staircases called “Stäffele” in the lovely local dialect.

The city is part of a wine growing region, so in the past the staircases served as access to the vineyards.

Today, Stuttgart city hills:
– are a great outdoor workout,
– the secret why people stay slim just by walking around,
– offer fantastic views over the city. Are not Lisbon hills, but still, you walk and stumble, quite literally, on a viewpoint.

Like with chocolate in Brussels, I was surprised to find out how many people living for years in Stuttgart did not know about some. I am very proud I discovered all of them in my first month and I showed them even to Germans, but maybe I am an extreme case.

We will talk about 5, my favorite ones where I have most memories.

This is the first one I saw in my 2nd day in Stuttgart by accident. I was lucky I moved in the summer. Is when I made the pictures below.

And that I photographed often and showed it to many people who have visited me or moved to Stuttgart. And where I had one first date.

The beloved Ice Pinguin for ice-cream is there. Most famous is “Mercedes Ice” flavour, already mentioned.

Is pretty always, but I think before sunset is the best time to go. 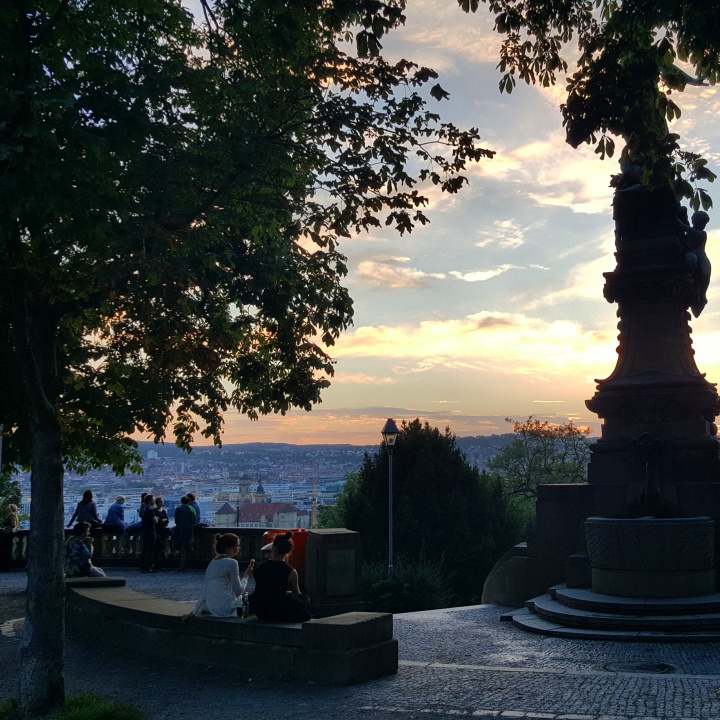 The popular Karlshöhe was the one closest to my home, so I’ve been there probably 100 times. Looks like a painting to me.

A good place for a picnic. And for yoga classes organized in the summer. And for reading.

And for a second date. And to stay at the biergarden Tschechen & Shöne. And I can continue, but everyone got the point. Is a must see.

When I moved it even had vineyards. Stop by Feuersee on the way or after.

The viewpoint, not the exotic city in Latin America. First I liked the name, than the view.

You can walk from Marienplatz on a path called Alte Weinsteige, meaning the old wine route. So actually is more like climbing, not walking. Or you take a very old and cute funicular, called Zacke.

In Marienplatz have an ice-cream at Gelateria Kaiserbau and go for vintage shopping on street Tübingen. Vintage Markt is the first stop. What an afternoon!

This one really feels like a workout, but is worth it. How amazing is nature, right?

Today, 22nd of April “Earth day” is celebrated. For me Earth day is every day. Besides our body, this Earth is the only other home we have.

Is a very special place. For me was many times after work. A few kilometers from downtown Stuttgart, but feels like a world away.

You can do many wine walks from Esslinger or Fellbach called “weinwanderung” in a long German word. So better than me.

In English is called Sepulchral Chapel on Württemberg hill.

The Mausoleum was built by Prince Wilhelm in memory of his wife, Katharina Pavlova of Russia, that passed away very young.

“Die Liebe höret nimmer auf” is the inscription at the entrance, meaning “Love never ceases”. Who knew the city can be so romantic?

There are so many other opportunities to have lovely viewpoints, all free:

These pictures of mine are not doing justice of how pretty the views are.

Mircea Eliade, a Romanian author, said that miracles are everywhere, you just have to see them.

One thought on “Viewpoints, wine & romance”

This site uses Akismet to reduce spam. Learn how your comment data is processed.

Welcome! This website is a creative outlet and a visual digital journal for my stories where cities are the main character, including Bucharest, Brussels, Berlin, Vienna, Stuttgart, Lisbon, Porto, Barcelona, Rome, or Paris.

Don’t be a stranger